On the 20th of March the English students embarked on a trip to The Globe to watch a performance of ‘The Taming of the Shrew’, the play we are studying for our A-level course. 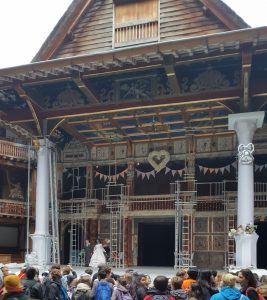 self was very interesting as it was not extensive. However, the actors made great use of the different levels, using the balcony and a variety of ladders. Never was there a dull moment in this rollicking production. The actors scrambled across the stage locked in brawls or arguments, especially between the two leads- the macho Petruchio and the tempestuous Katherina. The balcony was in constant use as dummies of Christopher Sly and his ‘ bride’ (from the Induction) were watching from above the scenes enacted below.

The actors used the stage well in terms of entering and exiting from different areas of the theatre, often through the ‘groundlings’ standing in the open space in front of the stage. Yet in some ways the staging was less than effective. Petruchio’s country house was never clearly defined – a pity- as exile to the country is a common interlude in Shakespearean comedy!
The actors were very enthusiastic and passionate, maintaining the pace of the rumbustious plot! Katherina, played by Gloria Onitiri, was a fairly conventional Katherina. Her voice boomed through the theatre in her verbal duels with Petruchio. Onitiri was well cast, being fit and athletic. She retained her enthusiasm, despite pouring rain and swirling wind during part of the performance! Katherina’s submissive final speech at the end is highly controversial and here Onitiri had nothing new to offer. 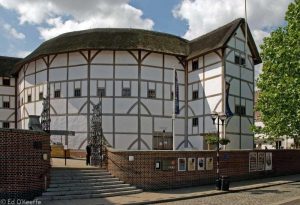 and fiery, as predicted! He certainly ‘tamed’ Katherina – much to the enjoyment of the male members of the audience!

On the other hand, Layo-Christina Akinlude, who portrayed Bianca, was not so well cast. The character’s subtle, manipulative trickery was never apparent.

In a minor role Grumio’s knock about humour would have appealed to the Groundlings. Even the old fool Gremio was effective in his electric scooter with its flamboyant side mirrors!

The costumes were calculated to appeal to the young audience. Tranio and Lucentio physically changing clothes on stage emphasised the change in social status. This was indeed a visual metamorphosis! The costumes varied from Elizabethan to modern – farthingales to glittery trainers. After all Shakespeare is truly timeless!
The music was partially effective but the modern, disco style seemed rather incongruous. Modern hits, from the likes of Jessie J and Jennifer Lopez, were well received by the audience but disappointed some who had expected a more traditional performance.
Overall it was an enjoyable, lively, fast- paced performance that helped us to see the type of playhouse where an Elizabethan audience might have viewed the play. However, it lacked a degree of finesse and as a result some of the themes of the play were neglected!