Most people are delighted with three or four A-Levels, so imagine achieving the equivalent of eight A*! This is the staggering achievement of CTC student Seth Daood who now must be regarded as one of the most educated students for his age in the country!

In his own words, Seth explains his time at CTC where he achieved A* grades in Biology, Chemistry and Physics. This follows on from qualifications attained at the world-famous BRIT School where he attained two A grade AS levels in Performing Arts and Theatre, a Diploma in Theatre – with a triple distinction* and a Mathematics A Level at A*. 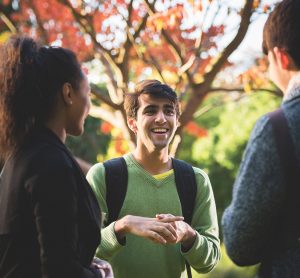 “Before coming to CTC I studied Theatre at the BRIT School of Performing Arts. I enjoyed my time there but due to low class numbers, I was not able to take Biology and Chemistry A levels, as I had wanted to. While at BRIT I felt I was missing something and so following my graduation, I enrolled at CTC to pursue my science A Levels.

When I began CTC the change was a shock to my system. Going from a school that was very relaxed and uninterested in academia to a school where the sole focus was academics, took some adjusting. I remember the first week of test periods really overwhelmed me, but I was quickly able to adapt and got into the routine that defines CTC.  Furthermore, the switch from Theatre to science was interesting but with the support of my teachers, I was able to focus my attention on my course without distraction.

I was lucky enough to have the same teachers for my subjects across the two-year period that I was studying at CTC. This meant that I could really develop strong relationships with each one of them, which really helped my studying in lessons. Additionally, I was able to bring a different dynamic to each class, which benefited not only me but also my peers, making lessons enjoyable even when the content was difficult. Throughout my time at CTC, I was also able to form strong relationships with members of staff outside of my lessons, who I could go and talk to if lessons were getting a little bit too tough (or if I really wanted a cup of tea!). Being able to form strong relationships with members of staff outside of those who taught me made my time at CTC very enjoyable and meant that I did not feel too isolated. Furthermore, there are lots of unique spaces at CTC to both work and relax which means you are able to find a balance between schoolwork and rest, which I found really maximised my productivity.

Another thing that I am really thankful for is the amount of friends that I have been able to make whilst studying at CTC. I have been able to integrate myself with both international students and home students and have formed friendships that will last a lifetime. I am truly grateful for my time at CTC and to finish it all off with 3 A*s is the best way to finish a fantastic two years.”

We wish Seth all the best in his future studies and hope he comes back for a visit soon!