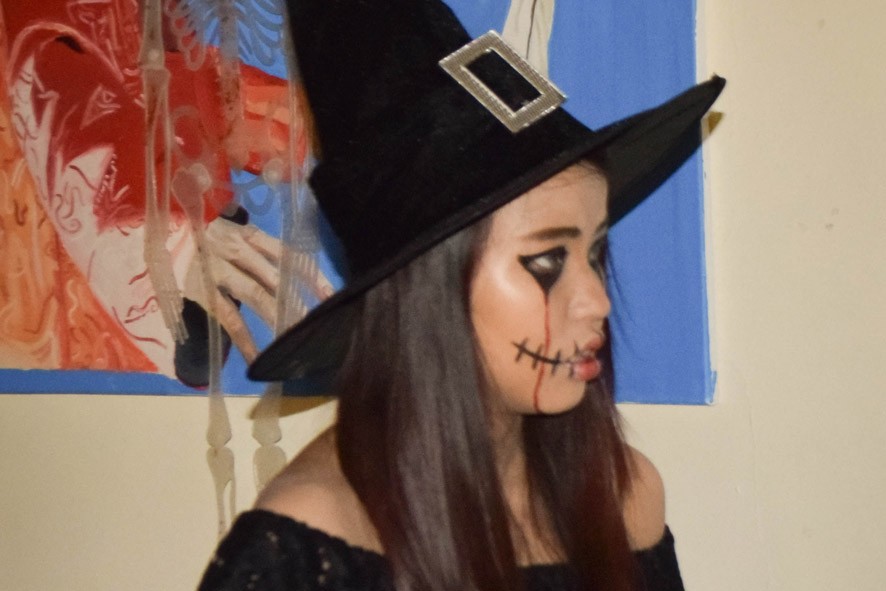 The Student Committee organised a Halloween Party on 3 November and tickets were pre-sold to buy pizza, nibbles, drinks, and prizes for winners of various games and costumes.

The party started at 5:30pm and the first game we played was ‘Musical Chairs’ and the winner of the game was Melvin!

‘Monster Mash’ was the game to follow. People are paired up and stand on a piece of newspaper where they must dance to the music (thanks to Roisin and Hajni, we had many songs on our party playlist). The music is stopped and the piece of paper folded, any couple stepping off the paper during the dance is then out. The game became harder and harder with each fold. The third fold resulted in one person holding the other in their arms or on their back. The winners of the game were Maria and Hana. Due to the difficulty of the game, the couple who were eliminated before the final round were also given a prize. That couple was Leo and Dao.

‘Apple Bobbing’ was another fun game; Brandon won with six apples in under a minute. During this time, the Scavenger Hunt took place. Students ran around college collecting tokens that had riddles to help you find the parts of skeletons. The team who completed a skeleton first was Karthus, Bence, Jerry, and Kuka. The second place winners were Claire and Joyce.

To end the evening, students engaged in spontaneous karaoke session. The awards for best dressed went to Hajni and Seth, Maria and Hana won second prize. It was a spooktacular night indeed!