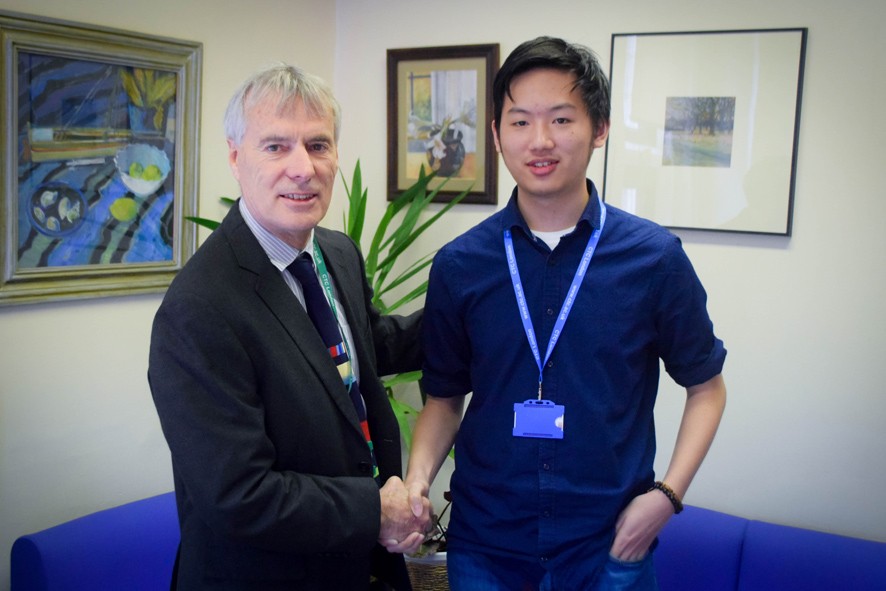 From an educational journey starting with long days and nights of study from an early age, Xiang Tai Tan has now received an offer to read Medicine at the University of Glasgow.

Xiang Tai was born in Malaysia and, since his parents were keen for their son to have a good education, they enrolled him in primary school in Singapore from the age of six. This involved a long and tiring commute so Tai would get up at 4.30am every morning to go to school alongside hundreds of others students all of whose parents wanted the best education for them. He would study late into the night and then get up and do the same thing again the next day. With hindsight, he sees that this ingrained in him a tenacity and resilience that would serve him well in the years to come.

When Tai’s grandparents’ health began to fail, visits to doctors of both western and traditional Chinese practices were a common occurrence for the family and Tai wanted to acquire the knowledge and skills that he saw in the practitioners. To gain personal experience of a doctor’s life and work, Tai shadowed a consultants in a variety of hospital settings and noted the expert way in which doctors related to patients. To develop his own caring skills, Tai worked both with autistic children and with the elderly.

With his sights firmly set on a career in Medicine, Tai applied to CTC because his brother had successfully studied with us in the past. Tai says, “I am glad that I did come to CTC to study my A-Levels, as the teachers are all so experienced and I received valuable support for my UCAS application”.

Tai joined our 18-month A-level course because, in Singapore, O-level exams are taken in November, unlike GCSEs in the UK which are taken in May/June. Consequently, Tai was eager to start in January rather than waiting until the following September to take the traditional 2-year A-level course. In fact, our 18-month course was introduced many years ago to cater specifically for students coming from education systems similar to that in Singapore. However, it is by no means an easy option as the pace of teaching and learning is rapid, covering the same curriculum as those students who take the 2-year option.

Tai’s O-level grades were weaker than expected so he knew this put him at a disadvantage to get a medical offer, but he was determined to do whatever he could to increase his chances. Aware that the universities would consider all components of his UCAS application, he endeavoured to strengthen his UKCAT performance and to write a top class Personal Statement to compensate for exam results that he knew would not compare favourably with other applicants.

He also strengthened the academic aspects of his application by offering an Extended Project Qualification (EPQ). This constituded an enormous workload as Tai was already studying for four A-levels but his efforts paid dividends and secured him interviews at medical school.

Tai says, “I think the resources provided for the teaching and preparation for interviews was simply superb. I personally think it is one of the areas which CTC excels in the most, as we were provided with much material and opportunities for mock interviews, whether it be a panel interview or MMI. In fact, I think the ‘Hot Topics’ that I was sent as part of the last-minute interview tips were partly responsible for helping me get an offer for Medicine. The Oxbridge/Medicine group was very helpful in this regard as well. I had never received such detailed and comprehensive training for an interview before and CTC covers all aspects extraordinarily well. If you had asked me two years ago if I thought I could get into medical school, I would most definitely have said ‘No!’ So I would like to thank CTC for assisting me with my medical application”.

Tai has secured an offer to read Medicine at the University of Glasgow and we wish him the best of luck in his A-Level exams!