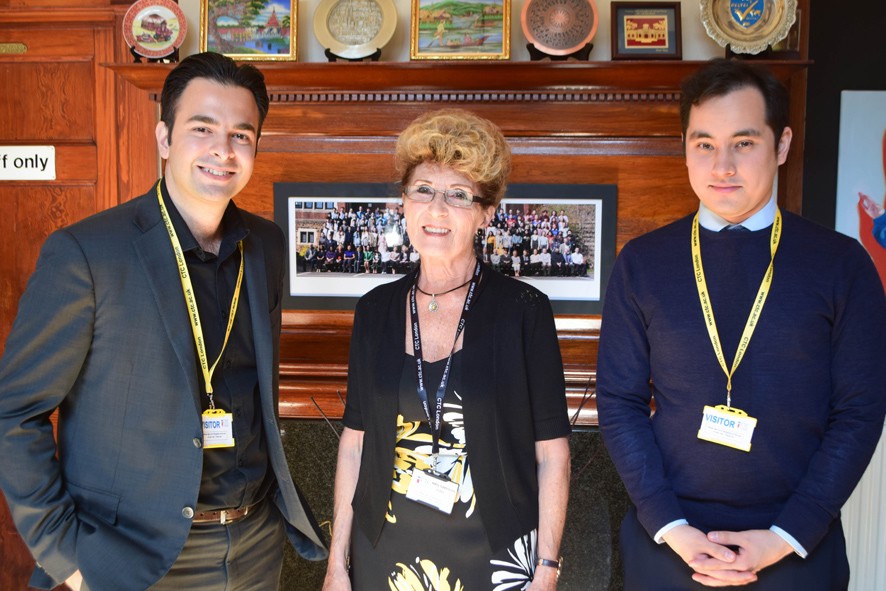 This year, our UCAS Preparation Day for Year 12 students began with an introduction by our UCAS Consultant, Mrs Valerie Simpson, in which she explained the importance of thorough preparation for university interviews. Participants from the assembled group were selected to demonstrate to their peers how to create a good first impression through appearance, demeanour, facial expression and body language. There was some amusement when a few artificial smiles looked more like rictus grins but this just conveyed more convincingly the fact that you only get one chance to make a first impression.

We were delighted to welcome back to the College, two former students, who left ten years ago are now successful in their respective careers. The first to speak was Almat Zhantikin, who came to CTC from Kazakhstan and won a scholarship to read Mathematics and Statistics at Oxford. He addressed the students on the subject of ‘Choosing your course wisely’. As he recounted his journey through A-levels and the UCAS application process, he explained how and why he had made some crucial decisions that would ultimately shape his future career path in the financial sector.

Our second alumnus, Ali Al-Aboosi, who came to CTC from Iraq, told the students how he had abandoned the idea of studying Pharmacy in his home country and decided instead to pursue a degree in Chemical Engineering at the University of Surrey. He has continued to work in this field and has maintained his friendship with Almat, which was forged while they were teenagers at CTC. Ali focused his talk on ‘Adapting to university life’ and stressed the importance of joining as many clubs and societies as possible in order to become a more rounded and interesting person. He explained that, when he interviews job applicants who all have the necessary paper qualifications, he is looking for the one who stands out from the rest and can offer something more.

The next two sessions presented the university perspective. Firstly, we heard from representatives from four higher education institutions based in London – Imperial College, King’s College, University College and the London School of Economics and Political Science. They spoke of the benefits of living and studying in the busy metropolis and they impressed with the vast range of undergraduate courses offered by their establishments.

As a complete contrast, we were then shown slides that conveyed the peaceful tranquillity of Royal Holloway, which, whilst being a college of the University of London, has its campus near the town of Egham, in Surrey. As we viewed images around the site, set in 135 acres of parkland and forest, it was clear that the UK really does offer something to suit all tastes in terms of the university experience.

Our students spent the afternoon engaged in an interview training workshop with Mrs Simpson and she ensured that everyone (well, almost everyone!) was encouraged to respond to questions – some straightforward, others more challenging. In small groups, the students acted out the role of interviewer, interviewee and observer, awarding points to their peers on the basis of their interview performance. It was a bit of light-hearted fun but all learned from the experience and could appreciate how they should and should not react to an unexpected line of questioning.

In the final session of the day, Mrs Simpson distributed CTC’s guide to the UCAS application process and showed students how they should complete their electronic application forms. We hope they all enjoyed the event and found it beneficial.